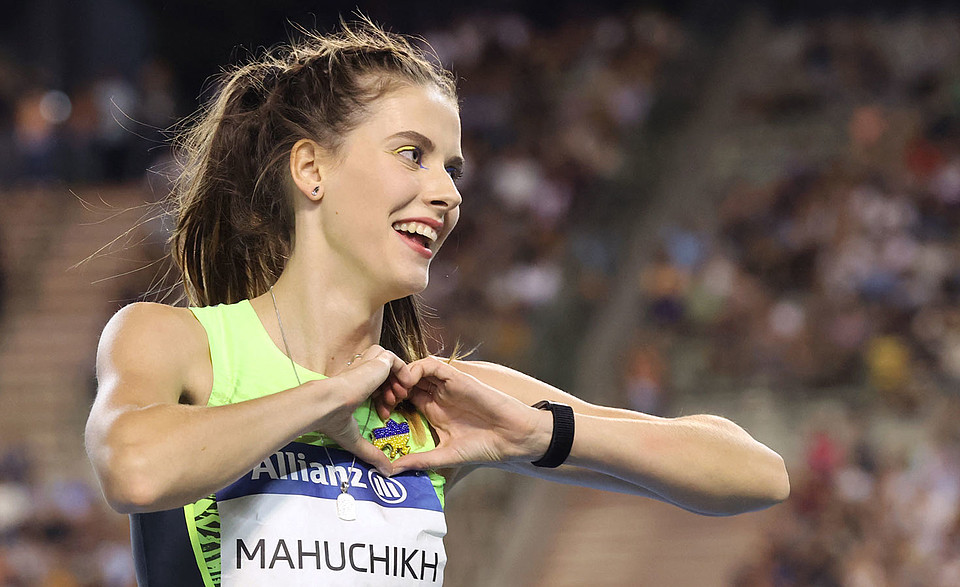 Yaroslava Mahuchikh in the high jump, Kara Winger in the javelin and Jacob Krop (5000m) have set world leading performances at Friday night's 46th edition of the Allianz Memorial Van Damme. Jasmine Camacho-Quinn broke the 36 year old meet record on the 100 metre hurdles, while Mondo Duplantis was stunned by Ernest-John Obiena in the pole vault competition.

"Tomorrow we're gonna give a show!," said Jasmine Camacho-Quinn on the eve of the Memorial and she truly made good on her promise. The Olympic champion for Puerto Rico won the 100 metre hurdles in 12.27, just 0.15 above the world record and a vast improvement of the meet record from 1986 set by Yordanka Donkova (12.42). The old record was also broken by Americans Tia Jones and Kendra Harrison in second and third respectively.

In the women's javelin Kara Winger provided one of the highlights of the night with her final throw. Reaching 68.11m, the retiring Winger set the world's leading performance, a meet record and an American record before she bows out. The previous MR of 67m99 dated back to 2014 set by Barbora Spotakova, who finished eight on Friday night (58m01). Japan's Haruka Kitaguchi was second (63m45) ahead of Serbian Adriana Vilagos (63m00).

Another standout moment came from Yaroslava Mahuchikh. The 20-year-old Ukrainian dominated the high jump competition with a personal record of 2m05. The European champion also set the world's leading performance and matched the 2011 MR by Anna Chicherova. World champion Eleanor Patterson settled for second with 1m94, followed by fellow Aussie Nicola Olyslagers (1m91). Mahuchikh also took three attempts at a world record height of 2m10 and while the bar came down three times, Stefka Kostadinova's 1987 benchmark of 2m09 does not appear out of reach for the young Ukrainian.

The biggest upset of the night came in the pole vault, where Mondo Duplantis suffered his first defeat in over a year. The Swedish-American sensation was poised to have a look at his own 6m21 world record, but instead struggled through the night and failed to clear 5m91. His remaining opponent EJ Obiena from the Philippines did just that on his third attempt and took the victory, delivering a rare blow to Duplantis.

In the women's 100 metres Shelly-Ann Fraser-Pryce rocketed out of the blocks and looked set for the win, but the five-time world champion was beaten at the line by fellow Jamaican Shericka Jackson, winning by 0.01 in 10.73. The time was just 0.01 shy of the current meet record which Fraser-Pryce shares with Elaine Thompson. Ivory Coast's Marie-Josée Ta Lou was third in 10.78 in another impressive women's 100m event.

Jake Wightman, Britain's 1500m world champion, competed in the 800 metres and ran to victory in a stunning time of 1:43.65, a new personal best. Algerian Djamel Sedjati (1:44.12) was second ahead of Kenya's Emmanuel Korir, the reigning world and Olympic champion.

The women's 400 metres went to Dominican Fiordaliza Cofil with a new personal best of 49.80, ahead of Sada Williams (50.15) from Barbados and crowd favourite Cynthia Bolingo, the Belgian setting a new national record of 50.19.

Kenya's Jackline Chepkoech triumphed in the 3000m steeplechase in a new personal best of 9:02.43. The Ethiopian pre-race favourite Werkuha Getachew had to settle for second (9:03.44), with Bahraini Winfred Yavi third.