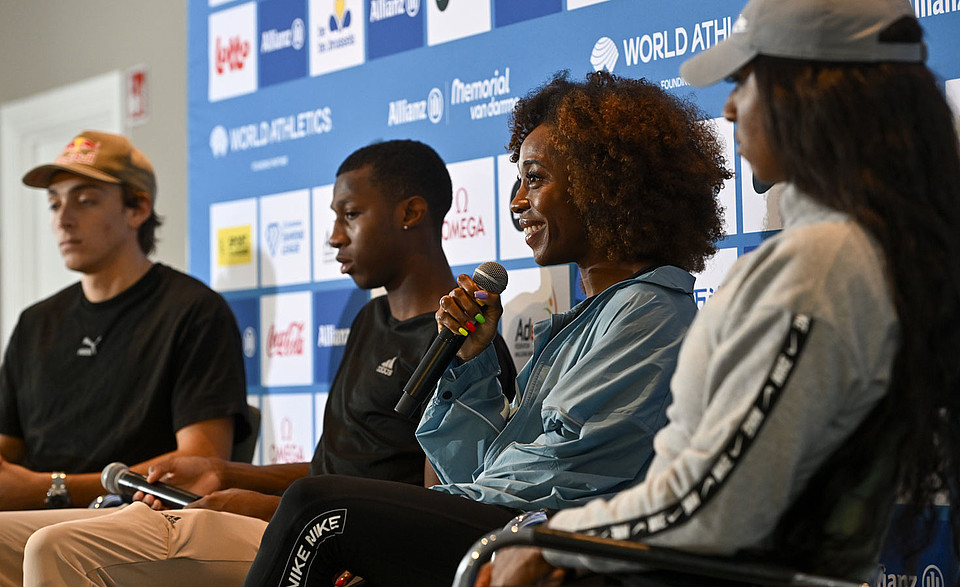 Five-time World Champion in the 100 metres Shelly-Ann Fraser-Pryce and world record holder in the pole vault Mondo Duplantis will be two of the biggest eye catchers at the 46th edition of the Allianz Memorial Van Damme on Friday evening. On the eve of the penultimate meeting of the Wanda Diamond League, they spoke to the assembled international press about their ambitions and expectations for the Memorial. Sprint sensation Erriyon Knighton and Olympic Champion hurdler Jasmine Camacho-Quinn also joined in.

Shelly-Ann Fraser-Pryce raced to a fifth world title in the 100 metres at the start of this summer and, at 35, feels fitter and sharper than ever. "I feel so good that it would be a shame not to run here and take advantage of that good feeling. I did have a small muscle contracture in Lausanne but it is not that bad and my tests yesterday and this morning were good," the Jamaican reassured everyone.

"I am really looking forward to running at the Memorial tomorrow," Fraser-Pryce continued enthusiastically. "I am consistently running a very fast season with times ranging between 10.60 and 10.70." Does she think Florence Griffith-Joyner's long-unapproachable world record (10.49) is within her grasp? "My PR is 10.60 and I firmly believe that a few hundredths more can be shaved off. And once you run times like 10.50 ... Then everything is possible. She has at least two more years to realise her WR dream, as Fraser-Pryce wants to continue until at least the Paris 2024 Olympics.

Duplantis: "I love the vibe of Brussels"

Mondo Duplantis holds the pole vault world record of 6m21 and set the meeting record in Brussels last year at 6m05. "But records don't come to order," says the Swede, who is the reigning European, World and Olympic Champion. "All the pieces of the puzzle have to fall into place: physically, mentally, but the weather and wind also play their part. The stadium and crowd will not be a problem tomorrow. I love the vibe of Brussels. You feel the energy of the stadium. It is one of my favourite places to jump. I will literally set the bar as high as possible tomorrow."

For Erriyon Knighton, the Allianz Memorial Van Damme will be a completely new experience. "It is my first time in Brussels," said the 18-year-old American, who won bronze in the 200 metres at the World Championships in Eugene and will also be running that distance at the Memorial tomorrow.  "My first impression is that it is a very beautiful and nice city. Two years ago I would never have dreamed that I would be able to travel the world to run and discover so many new cities and countries. It's a blessing."

Since breaking Usain Bolt's U20 world record, Knighton has at times been called 'the new Bolt'. "That comparison does not bother me. And if I suddenly mess up, the comparisons will soon stop too", Knighton chuckled. "I think it is just an honour to be mentioned in the same breath with such a legend. But all that history does not really keep me awake at night. I just want to run as fast as I can, that's all."

Jasmine Camacho-Quinn was last year's Olympic Champion in Tokyo in the 100 metres hurdles and took bronze at the last World Championships in Eugene. The 26-year-old Puerto Rican will have some tough competition tomorrow with vice-World Champion Britany Anderson and former world record holder Kendra Harrison. "We bump into each other at almost every meeting. We love those duels and don't avoid each other, we push each other," said Camacho-Quinn. "We want to bring a spectacle to Brussels tomorrow too. We don't like mediocrity. We're gonna give a show!"