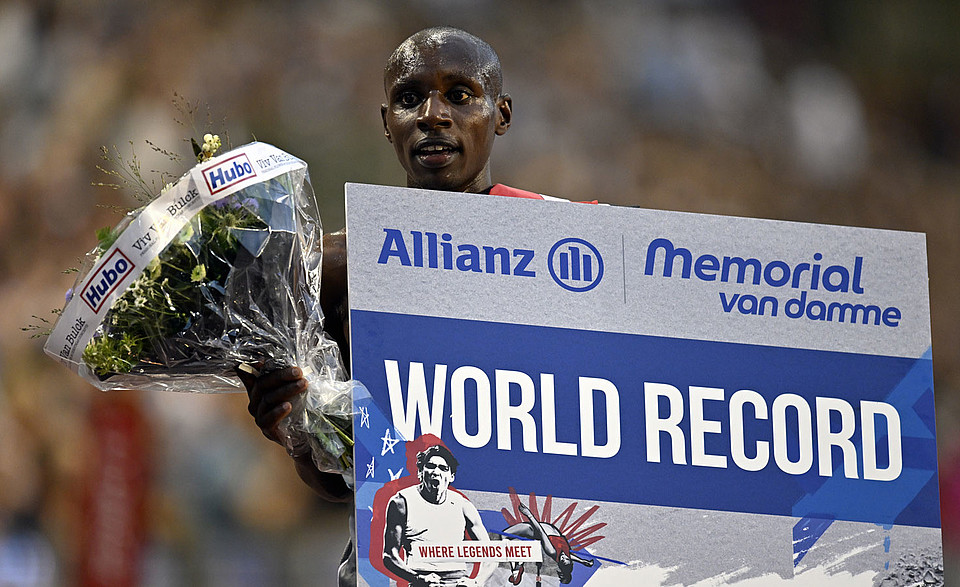 The 46th edition of the Allianz Memorial Van Damme started with a bang. On the one hour run Kenyan Sabastian Sawe established a new world record on the 15km and 10 miles. Bashir Abdi's world record on the 20km and Mo Farah's world hour record survived.

Along with fellow Kenyan Kibiwott Kandie, Sawe had set his sights on four world records. The main goal was the world hour record set in 2020 by Farah. But on the way they also took aim and the records on the 15km, 10 miles and 20km.

Levy Kibet set the pace for Sawe and Kandie until 10km, after which the two Kenyans took over command. Soon enough Sawe, who won this year's marathons of Seville and Rome, proved the strongest, with Kandie being dropped after 35 minutes.

Despite the rhythmic support from Burundian drummers and the vocal back-up from the Brussels crown Sawe could not sustain his searing pace. He was denied the 20km world record, set at the 2020 event by Bashir Abdi, by a mere 0.53s: 56:20.55 versus 56:20.02. Mo Farah's world hour record also remained just out of reach, with Sawe coming 80 metres short.

The multiple world record attempt was part of a celebration of Belgian athletics history. On 20 September 1972, 50 years ago, Gaston Roelants, Miel Puttemans and Willy Polleunis took a total of five world records on the Heysel in Brussels. Roelants broke the world hour record and the best ever time on 20km, Polleunis took the 10 miles record and Puttemans became the fastest man on 3 miles and 5000 metres.

Belgian athletics legends Gaston Roelants, Miel Puttemans and Willy Polleunis were in attendance on Friday night to support their successors. ‘Where legends meet’ is more than just a tagline for the Allianz Memorial Van Damme.