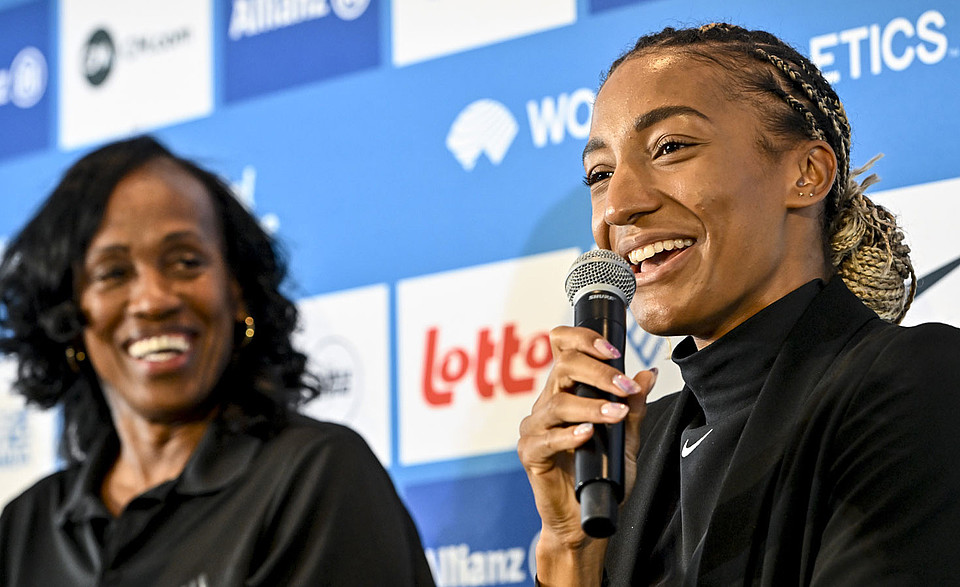 "I really wouldn't want to miss the Memorial. I think it's fantastic to be able to compete in front of my home crowd tomorrow, in a packed stadium," Thiam added at the Thursday press conference.

Thiam was joined by heptathlon world record holder Jackie Joyner-Kersee, who was officially inducted into the Allianz Memorial Van Damme Hall of Fame on Wednesday night and held a long jump clinic for kids in Vilvoorde, a town near Brussels.

"After a long and hard season the long jump is less straining than the high jump, Joyner-Kersee agreed. "The hardest part about being a heptathlete is staying fit. Nafi is an amazing athlete and person and a real competitor. She doesn't let her head drop when she faces adversity, but she keeps pushing even harder. She seems like she's perfectly balanced, you don't see her get stressed."

The question is whether Thiam can one day break the world record which 'JJK' set at a daunting 7291 points in 1988. "I've only managed to reach 7000 points once in my career," Thiam said modestly. "Then 7300 points is still a long way away. I don't go to bed and wake up thinking I need to break the world record. Maybe it'll happen, maybe it won't. I really just want to get above 7000 points again."

Joyner-Kersee added: "Yes, Nafi can break the world record. She has a great team and a lot of self belief. She is very strong in all the disciplines, she jumps over two metres, can jump 6m90, and one day she'll go below 2:10 on the 800 metres. On the heptathlon there's always a chance you unexpectedly rise above yourself on a particular discipline. I really believe she can do it."

When asked what Thiam envies the most about JJK's abilities, she replied: "I would love to have her speed, but of course it doesn't work like that. Heptathlon is not a video game where you choose your abilities. The only thing you can do is keep working hard. The fact that a legend like Jackie is so complimentary about me and believes so much in me is really nice. It's a great encouragement for me to work even harder in the future. But first I want to enjoy the Memorial tomorrow!"