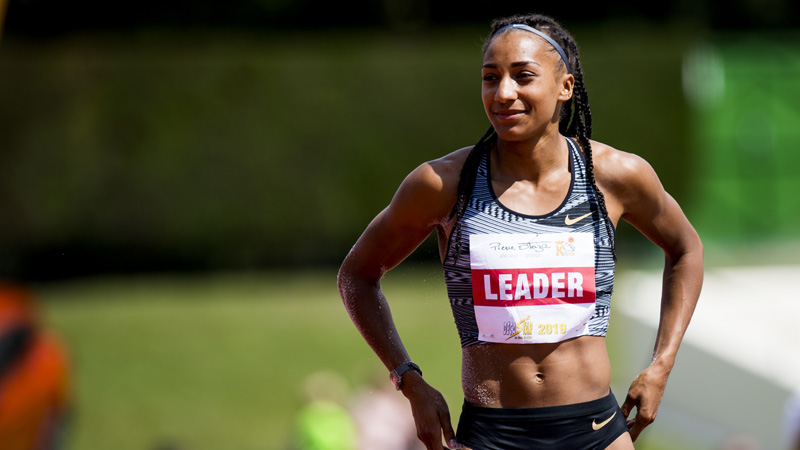 Nafi Thiam won the Heptathlon at the famous Décastar Meeting in Talence (FRA) with a total of 6.819 points, which is a World Leading Performance and the second best score in her career. Thiam’s national record stands at 7.013 points, the European record stands at 7.032 points.

Thiam was on her way to execute an almost perfect Heptathlon while she gradually extended her lead on the European record of Carolina Kluft from Sweden (7.032 points). But in the Javelin Throw she started to suffer from pain in her elbow. Her second attempt landed at 47,25m only which took her off target to break the European record. In the closing 800m she secured victory in 2’20”46, which is 5 seconds slower than her PB.

Thiam scored 6.819 points, the second best performance in her career, a higher tally than she scored when winning Olympic, World and European titles and a mark only bettered by her exceptional score of 7.013 points in Götzis in 2017.

“I am happy and sad at the same time”, said Thiam right after she finished her competition. “It was very strong Heptathlon and it is clear that I am already in good form. On the other hand : what happened in the Javelin Throw was very unfortunate and a bit disturbing. Before travelling to Talence the doctor gave me a positive advice, but it turned out the other way. I can hardly move my elbow at this moment, which means that it’s a serious injury.”

But apart from that Thiam has boosted her confidence in Talence. “ Every event was technically and physically decent. That is a good sign. Only the Javelin is difficult to judge with the injury. I set tree personal bests and also in the 100m Hurdles and the 200m my rhythm was very good, but I was hampered by strong headwinds.”

Still in her comments some disappointment could be noticed from the Olympic, World and European Champion. “I try to remain positive after 2,02m in the High Jump and a national record in the Long Jump. But it was a hard struggle for me to come back after injury and this is not how I imagined my comeback. You want to leave the stadium with good feelings, but I am not standing here with a big smile now.”