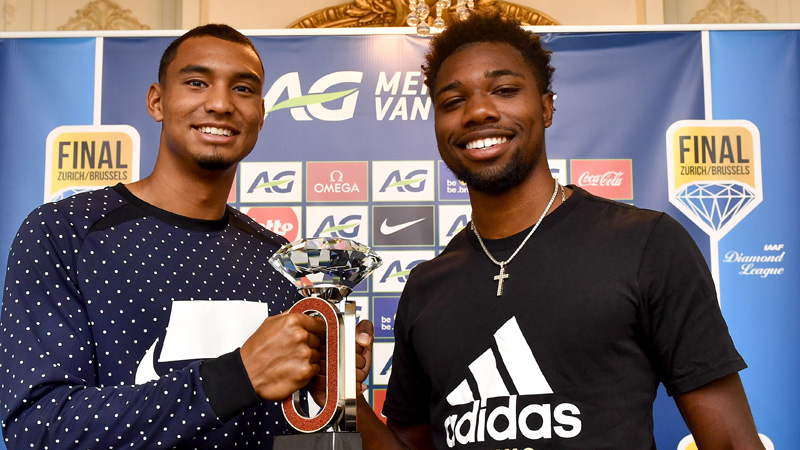 The fastest men of 2019 on 200 and 400 metres were united at the Thursday press conference for Friday's AG Memorial Van Damme. Noah Lyles and Michael Norman are looking to set ferocious times on the fast track of the King Baudouin Stadium in Brussels.

The bend of Brussels is well-known among sprinters. “I’ve only run in Brussels once, but everyone knows the reputation of that turn and the track. It’s very fast,” Lyles said. “I start in lane seven and according to my coach that’s the perfect lane. I don’t want to put a number on it, but let’s say I would like to beat my own personal best."

His PB is a 19:50, set in July in Lausanne. On the all-time ranking the 22-year-old American is now up to fourth place behind only Usain Bolt (19:19), Yohan Blake (19:26 in 2011 in Brussels) and Michael Johnson (19:32). “I have a lot of respect for what Usain did, but I want to leave my own footprints,” Lyles said. “I’m not going to dance or sing, although I can rap!” Lyles is more known for his striking footwear, including his Japanese-themed manga socks. “I am going to wear my Hero Academia socks again tomorrow.”

The second fastest man on the 200 metres is Michael Norman. Early July he clocked a 19:70 in Rome. “But until the Tokyo Olympic Games I will mainly focus on the 400 metres,” Norman explained ahead of Friday’s IAAF Diamond League finale, where he starts as the pre-race favourite. With his 43:45 from April in Torrance he’s the fastest athlete of the year.

Many insiders suggest Norman will be the next world record holder. That mens he’ll have to beat the 43:03 South African Wayde Van Niekerk established at the Rio Olympic Games. “I believe I have it in me. Maybe not this year, but hopefully next year,” the 21-year-old American said confidently. “I’m definitely looking forward to tomorrow’s race. Hopefully it’ll stay dry and we’ll get a really fast race.”

One journalist asked if Norman will get company from Lyles on the 400 metres. “I’ll give you a hint, the first two letters of my first name,” Noah Lyles joked. No 400, and no talk from him about a potential world record either. “Let’s first break Johnson’s American record. I’ll take care of the 200 metres”, Lyles continued. “And Michael [Norman] can break the 400 metre record."

Lyles and Norman will have to beat 19:32 and 43:18. Maybe they will already do so on Friday at the AG Memorial Van Damme.