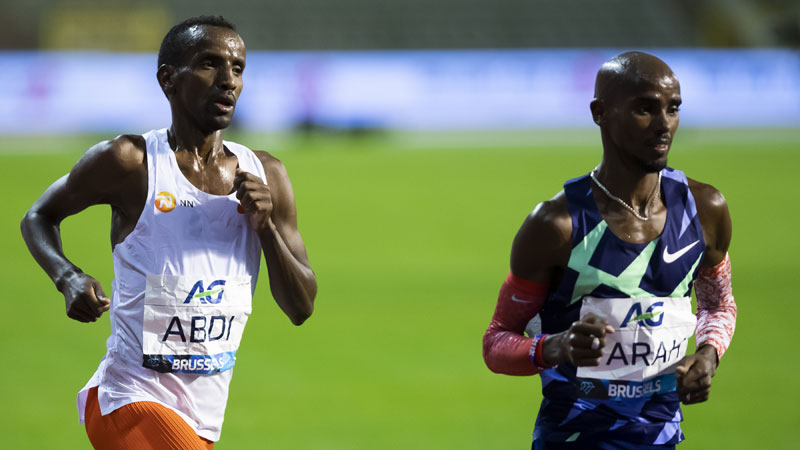 After Sifan Hassan led the way by beating the women’s world hour record, later on Mo Farah followed suit by setting a new world hour record in the men’s event: 21 kilometres and 330 metres is the new benchmark. In the same race Belgian Bashir Abdi also broke the world record on the 20 kilometres.

In 2007 the legendary Haile Gebrselassie set a world hour record of 21.285 km in Ostrava. It took a monumental effort to beat his record, with excellent pacemaking from Simon Debognies and Robert Keter. After their stellar efforts, Mo Farah had to take the lead himself, accompanied by Bashir Abdi.

Farah and Abdi could count on an extra little support along the way with the Wavelight, a green light on the inside of the track that indicated Gebrselassie’s world record pace. The race proved to be a close affair, Farah and Abdi staying within seconds of a virtual Haile for most of the hour.

In the final stages Farah and Abdi found another gear to make the difference with their predecessor. With 5 minutes to go Abdi took the lead, with Farah taking command in the final minute to set a new record. The four-time Olympic champion (2x 5,000 metres, 2x 10,000 metres) completed 21 kilometres and 330 metres, 45 metres further than Gebrselassie.

Abdi also beat Gaston Roelants’ Belgian record with 21.322 km, but there was even more good news for the Belgian from Ghent. Abdi was leading at the 20-kilometre mark, a distance recognised by World Athletics. That means Abdi is the new 20km world record holder with 56:20.02, also taking the record from Gebrselassie by six seconds.

Afterwards Abdi was awarded the AG Best of Belgian Trophy for the best domestic athlete of the night, a richly deserved accolade after a majestic performance in Brussels.