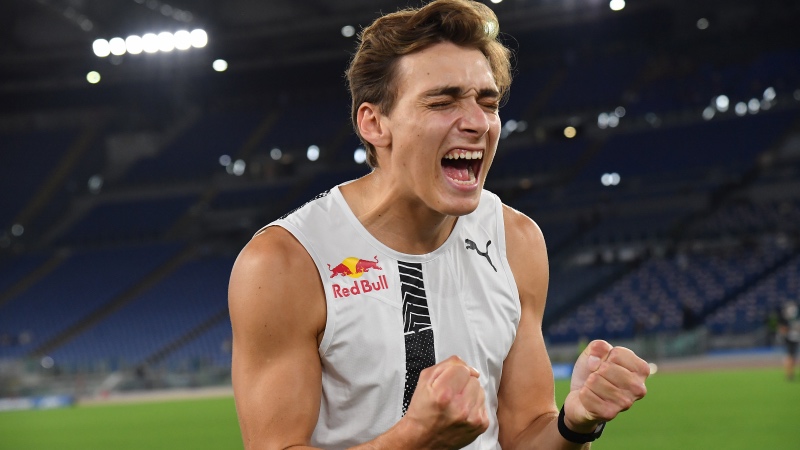 Sweden Armand Duplantis celebrates after set the highest ever outdoor mark of the men's Pole Vault during the IAAF Diamond League competition on September 17, 2020 at the Olympic stadium in Rome. (Photo by Andreas SOLARO / AFP)

He’s been the world record holder for a while now but on Thursday he also produced the highest outdoor pole vault. At the Wanda Diamond League Meeting at the Stadio Olimpico, Armand ‘Mondo’ Duplantis cleared 6.15m. Our compatriot Ben Broeders broke the Belgian record.

Swedish wonderkid Armand Duplantis (20) reinforced his position as the world’s best pole vaulter again during the Wanda Diamond League Meeting in Rome. At the World Indoor Tour in February, he had already cleared 6.17m and 6.18m, a height that is recognised officially as an indoor and outdoor world record.

However, nobody has ever jumped higher outdoors than Sergey Bubka’s 6.14m in 1994. After waiting for 26 years, the Ukrainian has found his successor. After thirteen attempts to clear 6.15m during previous meetings, Duplantis improved the outdoor record by one centimetre in Rome.

Duplantis started the competition with two attempts at 5.85m, then breezed over six metres and finally put the bar at 6.15m. His chest touched the bar in his first jump, but the second jump was a success.

“I have touched down on the mat, but my head is still in the clouds”, Duplantis beams. “This is the feeling you are dreaming of, but it still feels a bit surreal. Reaching that 6.15m outdoors was so important to me. I already had the world record in the bag, but I also wanted to prove that I am the best outdoor pole vaulter.”

Ben Broeders took second after Duplantis with a jump over 5.80m, with that jump he matches his best jump ever indoors and breaks the Belgian outdoor record.