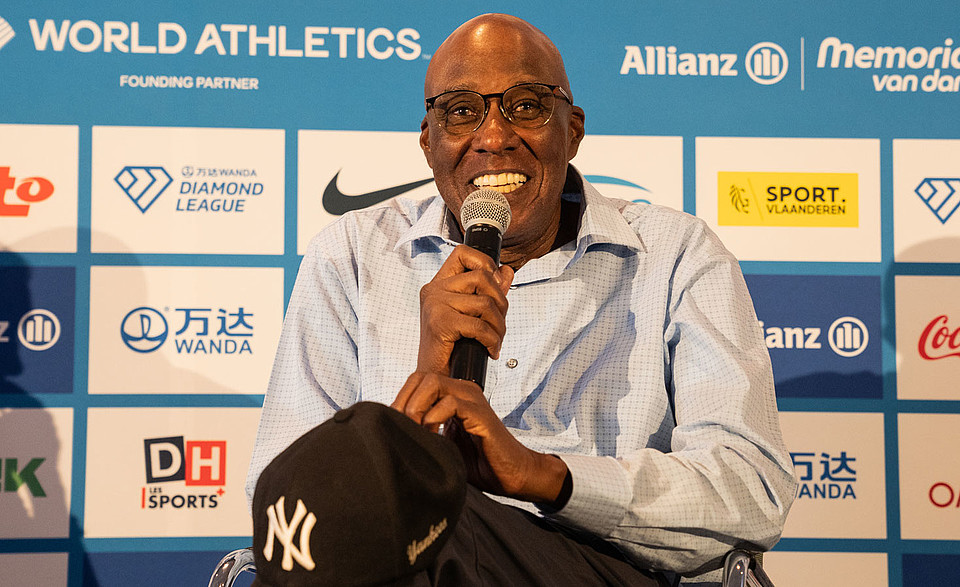 Bob Kersee has been one of athletics' most decorated trainers for decades. On Tuesday the American spoke to the Belgian media. Of course the heptathlon world record, currently held by his wife Jackie Joyner-Kersee was one of the topics of conversation, and whether Belgian Nafi Thiam would be able to challenge it.

Bob Kersee and Jackie Joyner-Kersee are in attendance in Brussels as 'JJK' will be inducted into the Allianz Memorial Van Damme Hall of Fame. In 1987 (7m07) and 1994 (7m11) Joyner-Kersee won the long jump competition at the Memorial. The most memorable moment in Joyner-Kersee's illustrious career was her heptathlon Olympic title in 1988. In Seoul she took gold with 7291 points, setting a new world record that still stands to this day, 34 years.

"Belgians are doing really well in combined events," Kersee acknowledges Nafi Thiam's double Olympic gold medal and indoor world champion Noor Vidts. "Hopefully the Americans can provide some competition. My wife's world record is eventually going to be broken, the new generation is ready for it. I really think Nafi can break the world record if the circumstances are right. Taking a third Olympic gold medal is not impossible either but it's not easy. It's super hard in terms of motivation and injuries. And as a woman it's even more complicated if you want to start a family."

“Two things are important for athletes”

“In my eyes there are two important things for athletes: it's that they want to bring out the best in themselves while enjoying the sport and that they develop a great personality. Athletes get the opportunity to come in contact with other countries and cultures through competitions such as the Olympic Games and the Diamond League. In my wife's case there was this friendship with Heike Drechsler, which back in the day wasn't that common given the split between East and West. They're still good friends to this day. Don't forget that athletes struggle when they hang up their spikes. The travel, the tension, the events; the love for the athlete's life is big and quitting is not that easy. I've seen that with Allyson Felix this year."

Talking about his stay in Brussels, Kersee added: "It's great to be back here with Jackie. The next few years I want to come back here with athletes. The Covid crisis has definitely hurt, especially mentally. You want to be able to compete here with your group. The world championships and the Olympics are coming up here in Europe and this continent has all the great competitions that you want to experience."

Bob Kersee married Jackie Joyner in 1986 while he was her coach when she achieved her greatest success. In 2022 Kersee is still one of the most prominent coaches in the world. He led Allyson Felix to several Olympic and world titles and currently coaches athletes including Sydney McLaughlin, the reigning Olympic and world champion as well as world record holder on the 400 metre hurdles.