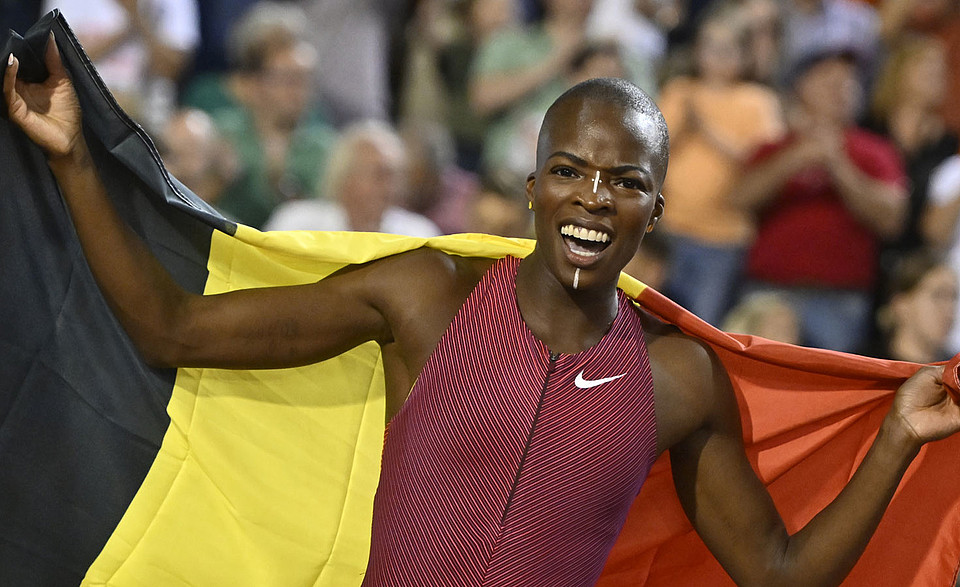 The Belgian home crowd at the King Baudouin Stadium had a lot to cheer for at the 46th Allianz Memorial Van Damme. Julien Watrin and Cynthia Bolingo raised the roof with new Belgian records, while Eliott Crestan also had a starring role. Nafi Thiam, Noor Vidts and the Belgian Tornados and Cheetahs also received plenty of support.

Julien Watrin powered to fourth on the 400m hurdles behind winner and world champion Alison dos Santos, the Belgian Tornado finishing in 48.66, improving his own Belgian record by 0.15.

The remaining Belgian Tornados competed in an extra non-Diamond League 400 metres. Kevin Borlée won in 45.72 with Alexander Doom (45.82) third, Jonathan Borlée (45.90) fourth, Dylan Borlée (46.07) fifth and Jonathan Sacoor (46.60) seventh. Afterwards the relay stars collected their Neuhaus Best of Belgium Trophy 2022 as a reward for their silver world championship medal and their bronze at the Euros in the 4x400 metres.

The women's 400 metres did count for the Diamond League, with Cynthia Bolingo shining among an international field by setting a new Belgian record of 50.19, besting her previous benchmark by tenth. Dominican Fiordaliza Cofil took the win in 49.80.

"This is really incredible," an ecstatic Bolingo said. "Five months ago I had knee surgery. It's just unbelievable that I've been able to break my Belgian record. Today I had the perfect crowd, the perfect race, a fantastic coach and a perfect family. I have to thank everyone, I am so proud."

In the 800 metres Eliott Crestan set a new personal best of 1:44.24, taking six tenths out of his previous benchmark. Britain's 1500m world champion Jake Wightman won the race in 1:43.65.

On the long jump, a non-DL event this year in Brussels, Belgian fans were looking forward to seeing their double Olympic and world champion in the heptathlon, Nafi Thiam, and compatriot Noor Vidts in action. Thiam was fourth with a best effort of 6m46, Vidts set a new outdoor PB of 6m40 in sixth place. Nigeria's Ese Brume jumped to 6m83 to secure the win.

Delphine Nkansa was handed a chance to take on the world's biggest stars in the 100 metres, starting in a race that included Shelly-Ann Fraser-Pryce and Shericka Jackson. Nkansa finished eighth in 11.29, just 0.03 shy of her personal best. In the 200 metres Robin Vanderbemden took seventh in 21.02.

In the 1500 metres Elise Vanderelst came home 11th in a season best time of 4:04.43. Robin Hendrix was 15th in the 5000 metres in 13:32.68. Belgian record holder Ben Broeders struggled in the pole vault and exited the competition at the opening height of 5m41.

Some of Belgium's best Paralympians were also given a chance to compete at the Allianz Memorial Van Damme. Léa Bayekula, a bronze medallist at the 2021 Euros, won the 100 metres for wheelers in a personal best of 16.41. In the men's 200 metre race Peter Genyn and Roger Habsch were denied by their perennial rival Toni Piispanen. The Finn came home in 36.91 ahead of Habsch (36.97) and Genyn (37.07).